Before launching her businesses, Tatum Temia Ayomike saw herself as a regular person with a desire to do more. She didn’t start as an influencer; she grew up in a household observing entrepreneurship and the freedom it provided through her mother’s pursuits. Shortly after graduating college, Tatum commenced her entrepreneurial journey establishing a six-figure business within four years.

Currently, Tatum is the CEO and Executive Producer of Anchored Media, a podcast building platform through which she built her show, “Blessed and Bossed Up.” Without spending a dime on advertising, Tatum’s podcast reaches approximately 200,000 people monthly. Success aside, Tatum stays humble by remembering that her accomplishments are directly tied to her obedience and increased faith.

Given that business growth is reflective of your personal and spiritual growth, this #FaithinBusiness series highlights five phases of Tatum’s journey.

“I started seeking God for my identity, and that included my identity as a business owner.”

Like many entrepreneurs, Tatum started out using her experience to create businesses that followed the outline for what good corporations do. While she saw early success, her growing faith helped her realize something was missing.

“I was engulfed in entrepreneurship, and behind the scenes, I was trying to learn what it truly meant to live a life after God. I was keeping the two separate because I was taught not to mix my career with religion. As my faith started growing, I realized that my faith and business were one.

A turning point for me was when I came across Jeremiah 1:5, which says, ‘Before I formed you in your mother’s womb, I knew you.’ I’m like if God knew me before He formed me in my mother’s womb, what I am doing? Why was I trying to figure everything out? That’s when I erased the barrier and started seeking God for my identity, and that included my identity as a business owner.”

“I had to be obedient when I didn’t know what was going to happen. Faith is confidence in things unseen.”

Every successful business has moments of reflection and adjustment. When walking by faith, this can look very scary and uncertain, but there’s always a higher purpose.

“I was making money in my coaching business, I was a full-time entrepreneur, and everything was on the up and up when God told me to shut everything down until He told me what to do next. I didn’t have a plan; I just had an instruction. The marketer in me was like, ‘This isn’t smart.’ Everything we started was doing well, but I decided to be obedient. I shut down my business, told my clients we wouldn’t be renewing and waited for God.

At that time, my podcast became Blessed and Bossed Up, and I put out a book and journal. It was a scary faith because I had to be obedient when I didn’t know what was going to happen.”

“A lot of us want to go straight to the promise, and we’re not ready for it.”

To reach new levels in business, you have to rid yourself of old mindsets and habits. Whether this is through reading, therapy, or fasting, it will still be a process; there’s no circumventing it.

“Between 2017 and the first half of 2019 was my pruning season. For a year, I fasted every Monday for God to work on anything I was holding on to. As I was studying Jeremiah, God had to show me that success wasn’t achieving the material things I wanted; success was pleasing Him. Jeremiah was successful because he obeyed what God told him to do and say. The pruning season was a test to see if I was on board with God’s definition of success. It wasn’t that the things I wanted to be were wrong because God will give us the desires of our heart, but if I’m chasing that, and not chasing Him, then success becomes an idol.

I was self-employed with no business because God said to shut it down. I had a podcast, but it wasn’t monetized yet. I had a book and journal, but after a while, your sales trail off. I had to sit, not knowing what the business was. As an entrepreneur, I could have created something, but God said He would give me instruction, so I silenced my inner hustler in order to obey Him. It was a painful season and a huge struggle; a lot of people call it the waiting season.”

“My faith was built on the brick of every ‘yes’ I gave God.”

When you are diligent in your pruning season, you will reap what you have sown.

“The second half of 2019 was a season of harvest for me where I started to see the result of everything I fasted, prayed, and cried for.

In May of 2019, while fasting for a friend, God gave me the idea for Anchored Media, the whole business model; I had four to five pages of notes. He had been giving me bits and pieces of a media company over the years, but this is when He finally put it all together. I went to work. I planned the retreat He told me to do, it sold out in four days. I did another one, same thing. Sponsors for my podcast started coming out of nowhere. Within six months, Anchored Media was a six-figure business. Everything changed.”

“I allow God to tell me what season I’m in and align my actions with what He says.”

“Now I’m in the season of cultivating because I have everything I’ve believed God for, and the Bible says we go from glory to glory. I have to cultivate this level of glory appropriately, so I can continue to reap the harvest and get to the next level God has for me.

I’m always growth-minded, but right now, it’s not so much of a grind. I have to wait for God to show me what growth looks like in this season. I allow God to tell me what season I’m in and align my actions with what He says.”

Tatum’s journey is full of so many gems that she shares every Monday on her Blessed and Bossed Up podcast. Tune in for actionable business and spiritual nuggets, and check out Anchored Media if you’re a new, aspiring, or existing podcaster. No matter what phase of the journey you are in, plug in to get empowered. 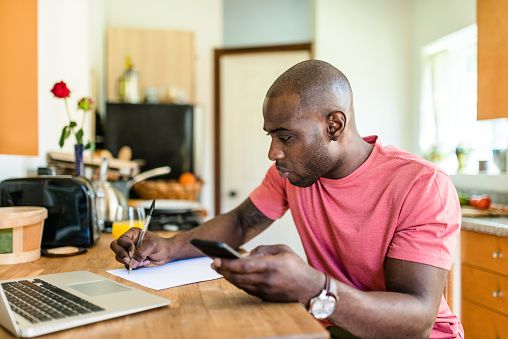 COVID-19 has made a huge impact on many employees across the country. For the past few weeks, employees have been laid off unexpectedly and not knowing how they’ll be

Women’s History Month may have ended, but do we really need just a month to celebrate the impact women have made on history, our country, and our lives? Yep,