The tech industry has undoubtedly become one of the most sought after career fields, especially in the millennial generation. However, if you’re not technical by education or trade, it can be hard to get your foot in the door at these tech companies.

Because of this, there are several “coding bootcamps” that exist with the aim to help you accelerate your career in tech by teaching you how to code. However, just like it can be hard deciding what college you should attend, figuring out which coding bootcamp is best for you can be difficult too.

Enter Career Karma – a marketplace that helps match people to coding bootcamps, along with providing peer-level support and mentorship.

Career Karma was built by Ruben Harris, and brothers Timur and Artur Meyster. Prior to launching Career Karma, the trio launched a podcast called Breaking into Startups, which featured inspiring stories of people who broke into tech from non-traditional backgrounds. Timur, who broke into tech through the coding bootcamp, App Academy,  mentioned in a Forbes interview, “We realized we weren’t the anomaly coming from other careers. In my class there were parents, doctors, lawyers, college dropouts, and recruiters. A lot of people outside of tech don’t realize that there are people like them in tech.”

Shortly after creating Breaking into Startups, Career Karma was launched as a level up from the podcast, helping the listeners go from dreamers to doers with a career in tech.

Since launching Career Karma, the founding team have successfully gone through Y Combinator, and have raised $10 million dollars in venture capital.

In an exclusive interview with Mogul Millennial, Ruben Harris the CEO and Co-Founder of Career Karma shared his journey from working in investment banking to launching a startup, tips on overcoming your weaknesses, and his views on diversity in tech.

How did your work experience, education, and your upbringing influence you to be the entrepreneur that you are today?

I was born in California but moved to Atlanta, Georgia when I was one. When I think about my upbringing and the ways that I got money, it wasn’t really until college that I got my traditional job. Up until then, I was doing everything from buying candy and selling them, like purchasing Blow Pops for ten cents and selling them for twenty-five cents. I’ve sold lemonade, I’ve done landscaping work, and have cut plenty of lawns.

I think my first formal jobs were as a janitor in college, and then working in retail at Abercrombie & Fitch and Hollister. From there, I worked in radio at a classical music station.

Looking back, growing up in Atlanta, I was surrounded by great Black and Brown people that inspired me. It’s always been my mindset that people will underestimate me, but I knew that I had the power to easily exceed their expectations.

I’ve never seen my differences as a weakness.

I think many people are embarrassed about things that make them different, but if you embrace it, it’ll be the exact thing that people love you and pay you for.

How did you go from being an investment banking analyst to an entrepreneur?

Growing up, I knew that knowing finance was a skill that would lead to a great career path in investment banking. Many people that went to selected schools were often exposed to lucrative career paths like finance. I learned that the outside world knew that investment bankers made a lot of money and were perceived to be extremely smart. Having this type of career isn’t unattainable, but the issue for many people is that most people don’t know how to get the skills. It’s a lot of people that want to be great, but they don’t know how to.

A lot of the knowledge of working in finance is isolated, but I was able to discover the skills necessary for this career in investment banking through a blog called Mergers and Inquisitions.

I found this blog by just searching online to see what jobs were the hottest at the time. When I graduated, I had a 2.98 GPA from a school that no one heard of, I had almost dropped out of college, but I knew that I was smart and that I wanted to do something great. So while looking for job information online, I Googled “investment bankers” and a lot of resources came up (one of which was Mergers and Inquisitions). This website was everything because it had a ton of knowledge, and broke down investment banking and finance into terms that were relatable.

Soon after discovering them, the blog launched a program called Breaking Into Wall Street. I knew then that I could learn and teach myself skills to become an investment banker. I later realized that when I was trying to get into the workforce of investment banking, I didn’t know how to get in but I taught myself and had resources.

Today, it’s the same with tech.

There are so many people that want to work in tech, but don’t know how to. I created the podcast Breaking Into Startups because most media that we were exposed at the time was focused on entrepreneurship or venture capital, but that’s not attainable to most people. You can become successful and help thousands of people, but for some people, that’s not their ideal career move.

When we created the podcast, the idea was to educate them about career paths and give them the resources to follow. Some people would follow it, because they’re naturally driven and will go hard, but most people don’t have the natural discipline and drive to make it through. They doubt themselves, they get scared, or they get tired.

Later, launching Career Karma was a natural evolution of the podcast. We wanted to have a dedicated resource that would highlight information on how to get into these tech spaces, and we wanted to make a platform for anyone to connect with like-minded people. We wanted people to be aligned with the companies that they wanted to join. Career Karma has allowed us to get this done.

With Career Karma, our community can get peer-level support and mentorship, in addition to guidance from people who may be one or two steps ahead of them.

Without a doubt, people of color, especially Black people, are lacking in numbers in the tech field when compared to our racial counterparts.

What difficulties would you say Black people are facing when trying to get jobs in tech?

There’s definitely racial dynamics in companies, and there are definitely stereotypes that exist. I think that companies don’t always understand the cultural aspects of different environments that cause people to leave. I think that’s why a lot of people that come from underestimated backgrounds don’t know how to get in.

Between the combination of lack of knowledge and the mindset, if you haven’t accepted yourself, and convinced yourself that you’re great, it’ll be hard to convince someone else that you’re great. I think we all need to start dissecting ourselves and embrace who we are. I think when we are going through a process of reinvention like trying to break into tech, we leave behind all the life that we lived before and we’re not comfortably ourselves.

For example, let’s say I grew up in Louisiana or somewhere that has an extensive seafood culture, and I’ve worked in seafood restaurants all my life. Later I decide that I want to become a software engineer but for some reason, I’m embarrassed about my seafood restaurant experience and I never bring it up in my interviews. Unknowingly, I don’t realize that the tech company I’m interviewing for is trying to create a tech alternative to improve the seafood industry. If I talked about my experience, I would be marketing myself as a seafood veteran that knows how to code. Instead, I decide to keep things that I think others wouldn’t like to myself and it causes me to miss out on opportunities.

I also believe, that most interview fails are not due to technical reasons; many people don’t walk in with confidence and don’t know how to communicate. Communication is one of the biggest challenges for many people.

What tips do you have for entrepreneurs and 9-5ers who may doubt their greatness?

You can be you if you’re good. Good is relative, and it’s an opinion defined by you. You need to set a bar for yourself on what good looks like. If you haven’t met that bar for yourself, then you’re not ready to get in the game.

You also need to realize that you are not defined by your job. For example, people that get into Google start defining themselves as a Googler. But your work doesn’t define you; you are you. Too often we aspire for jobs and brands to give us value, but you have to give yourself the value and love yourself.

What motto motivates you as an entrepreneur?

I really like the Jay-Z quote that says, “People look at you strange, saying you changed, like you’ve worked that hard to stay the same.”

I’ve personally gone through so many changes in life. I’ve been playing the cello for 28 years, and I’ve worked in several industries like in radio, education, healthcare, politics, and have even thrown parties before. Every time I’ve made a switch, there has been someone in my world that has verbally or nonverbally shown that they thought I was acting brand new. But, I kept pushing.

This experience reminds me of another Jay-Z quote that I like, “Crabs don’t belong in a barrel, they ain’t never tell us that. We can easily make it out if we stand on each other’s back, then pull each other out, as long as we stay attached.”

For some reason, now everyone is often on a solo mission. They have a self-made mindset, but don’t realize that there isn’t a such thing as a self-made person. It doesn’t have to be lonely at the top. I fully believe in collaboration over competition.

I wake up every day excited, because I recognize that I could be gone tomorrow. I’m so grateful to be alive. Every day I fight for other people, and find ways to give back and work with others. I want to help other people become greater. That’s the ultimate level of success.

Lastly, another quote I like, a Dr. Martin Luther King Jr. quote, “When you discover what you will be in your life, set out to do it as if God Almighty called you at this particular moment in history to do it.” I believe in God and I believe that we all have a purpose and unique talents. It’s senseless to bury your talents, and we all need to find a way to use our talents to make the world a better place.

To keep up with Ruben, follow him on IG @rubenharris. If you have an interest in learning how to code, or you’re an engineer looking to get connected with like-minded peers, make sure you download the Career Karma app to get started on your way. 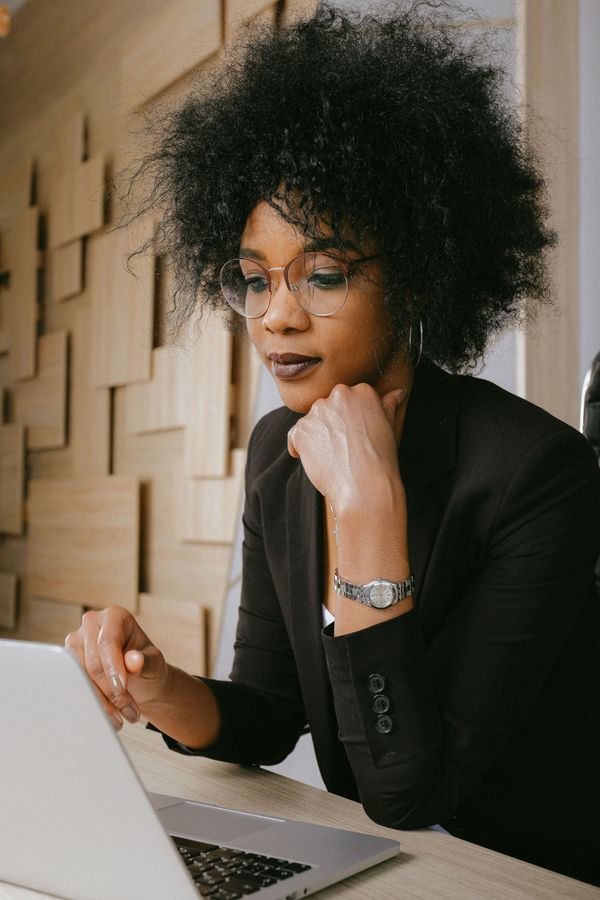 As unsatisfied as we may feel in our current professional situation, the thought of changing industries is daunting at best and paralyzing at worst. As a creative writer turned corporate 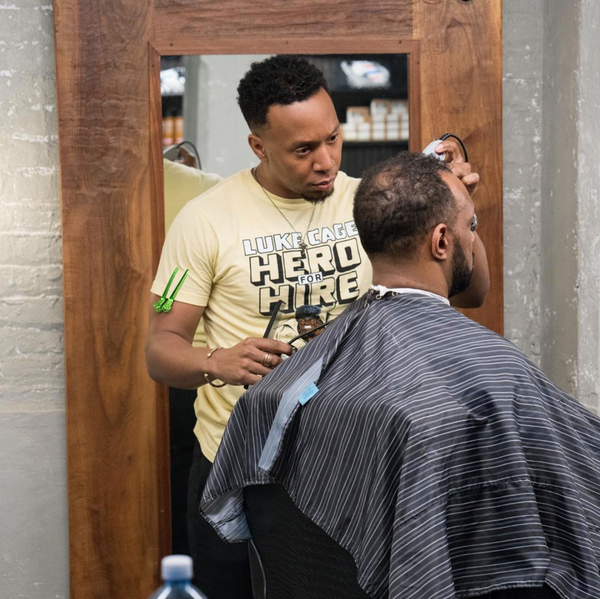 Starting a new venture can be a daunting, intimidating, and stressful task. When it comes to the world of entrepreneurship, you often make a lot of mistakes before you reach