From creating everything from the internet, to the guitar, to the elevator (and much more), Black people have played an important role in the world’s technological development over the years.

Adding on to the list of inventions created by Black people is the BESK. The BESK is the combination of a backpack and a desk that was created by JoCari Beattie, and entrepreneur and inventor based in Louisville, Kentucky.

With the BESK, users can use it to store and transport their supplies (like a backpack) but on the flip side, users will get a space to do their work (like a desk). In addition to all of that, it adjusts in height to allow people to sit on anything from the ground, chairs, benches, or even standing.

JoCari invented the BESK while trying to balance his work as a student but also as an athlete in college. During this time in between classes and attending practice, JoCari would try to go to the beach or to areas around campus to do work but couldn’t find any flexible workstations to meet his needs. This inspired him to create his version of a portable workstation, the BESK.

After coming up with the idea, he knew he would need to raise funding to bring his idea to fruition. Overtime, through winning pitch competitions, receiving donations, and crowdfunding, JoCari has raised funding for his invention and is now working to get his product out to the masses.

Because crowdfunding is a great way to raise funding and is often looked at as an overthought in comparison to venture capital, we connected with JoCari to talk about his tips for founders on running a successful crowdfunding campaign.

Why did you choose Kickstarter to crowdfund?

I became aware of Kickstarter in college while at Florida A&M. In one of my classes, the final was to create a Kickstarter campaign. It’s funny because I actually made a Kickstarter for this same product but we were much earlier in our journey. I ended up failing the class because my campaign never posted. A little later, I decided to get back on Kickstarter to prove myself because I shouldn’t have failed that class at all. Through that failure, it showed me that I needed to work on a lot of stuff so I wouldn’t run into the same issues again.

From there, I worked on what was needed, got my campaign up, and put up a video that I had made for a pitch competition. Within the first day, we were 28% funded, top two in the world, and number one in the U.S.

How should a founder prepare for his/her crowdfunding campaign?

One thing that was really important for us and helped out was already having a following. I recommend to already have a following whether that’s through social media or email marketing to get people aware of you and your product. That way before you even launch the campaign, they already know what’s going on, instead of just launching a crowdfunding campaign and hoping people will come to it.

Another thing that you want to do is know your story. With Kickstarter, it’s more about sharing information about the founding team and how they got there. You don’t want your Kickstarter to only be about the product. What you’re building is cool and all, but people really put their money toward other people. So when you talk about your story, you want to share how you got there, and then also how your product could help other people.

I remember the first video we had put up on Kickstarter was literally only about BESK. As I was doing some research on other people videos, I realized we needed to change that, so we updated our video. We fixed the video quality and included more information about myself in it.

At one point after we first launched the campaign, we started trending, and then we dropped. We found out it was because we didn’t have very high-quality photos or videos, and they [Kickstarter] probably didn’t want to put us on their main pages because of it, even though we were doing extremely well. I recommend if you're going to crowdfund, make sure your main photo of your product is high-resolution and your video is high-resolution as well. Those are two things that I would definitely recommend to put a decent amount of money toward.

When you launched your campaign, did you hire PR and if so, how did they influence your crowdfunding success?

I didn't hire anyone because I couldn’t afford it. Instead, I sat down and brainstormed on how I could bring the most people to Kickstarter. I ended up coming up with a plan to get in front of a lot of people and one of those ideas included participating in pitch competitions. No matter if I won or lost, the goal was to get in front of as many people as possible so they could see the prototype, and give us funding on Kickstarter.

I ended up participating in quite a few competitions and did well. Some of the benefits of winning was maybe I would get a chance to get on a podcast or would get an interview somewhere. We were also in a couple of news articles towards the end of our Kickstarter campaign which definitely helped out for sure. I also pitched a few media companies on my own which brought attention.

What are the biggest lessons that you've learned from your experience crowdfunding?

Well, it’s pretty unique how I learned it. This guy sent me a message on LinkedIn and asked me where do I see myself in 10 years and what was my biggest hurdle or fear - and he's literally this random guy. I told him that I didn’t really know, but maybe it was asking people for things. His response was simply, “Okay if you need anything let me know.”

During this time I was raising money for BESK and people would ask me how they could help me out, but I never asked for anything. I see now that I felt asking for things was a sign of weakness. Thankfully I realized that me asking for what I needed could make the difference between my Kickstarter being successful or not.

After that realization when people would ask how they could help, I would tell them about my Kickstarter and would ask them to contribute or share it with someone else. I started to tell more people about it even if they didn’t ask me. For example, if they liked my LinkedIn post, they were getting a DM.

That was one of my biggest challenges.

For more tips on crowdfunding, check out this free course!

Collectively, Black men and women spend billions of dollars on their hair and skin each year. In 2017, Black consumers captured 86 percent of the ethnic beauty market - accounting 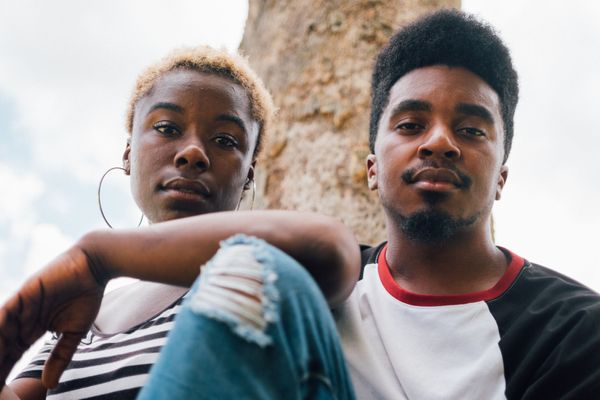 The Quick Pitch is the premier place for Black founders to practice their pitch, get feedback from leading investors, and grow their network and business.