“We are not underrepresented, we have been historically excluded. Language matters.” - Janel Cubbage

This quote is directly reflected in the inequality seen in higher education when it comes to the endowment gap. As you may know, many universities rely heavily on endowments to support their institutions and students.

Much smaller than PWIs.

See what I mean.

In the end for HBCUs, this means fewer resources for financial aid, libraries, scholarships, support for university staff, career readiness for students, and more.

Many PWIs have been able to increase their endowment by investing in successful startups and receiving crazy money on their return. But unfortunately for the longest, HBCUs have been excluded from these types of opportunities.

“If you’re not able to write the size of large checks they’re looking for, you won’t be invited into the room,” Frank Bello, Howard’s first chief investment officer, shared.

Thankfully, Base10, a Black-led VC firm, recently raised a $250 million dollar fund called The Advancement Initiative to help support HBCUs. This new initiative will support HBCUs by giving them access to invest in leading pre-IPO startups. From there, Base10 will donate 50% of the profit directly back to the HBCUs to create student scholarships and support their university endowments.

We recently chatted with their newest Partner, Jamison Hill, to learn more about their initiative, and to get his tips for early-stage founders and HBCU students who are aspiring entrepreneurs.

Why Jamison supports The Advancement Initiative

From the beginning at Base10, we made a commitment to help our founders build inclusive companies and cap tables, and find organizations that support racial equity, and disadvantaged communities.

That was where we started, and last summer, we asked ourselves, how can we do more. We said to ourselves, ‘What is the real root of inequality?’ Unsurprisingly, the answer that we kept coming back to is capital. The Advancement Initiative came out of this desire to direct capital toward communities that have historically lacked access because of systemic racism. The best way we found to do this was through historically Black colleges and universities.

Through the $250 million fund, part of that capital is from HBCUs, and part is from mission aligned foundations and endowments. We donate 50% of the profit from the fund back to the HBCUs, who are investors into the fund. If the fund returns a 3x, or a 4x, the HBCUs in the fund actually get a 7x or an 8x, because they're getting 50% of the profit that otherwise would have gone to us as the general partners in the fund.

Long-term speaking, our hope is that by bringing more dollars to these schools, it inspires students to go on to create companies. The way that venture works, it's all about the outsized outcomes. So if you have a Facebook that gets founded by a Howard student, that is transformational across all of technology, and Black life in America.

Entrepreneurship is the American way of wealth building. It is our hope that the Advancement Initiative, from a long-term perspective, provides access, and that the next Stripe or the next Facebook is founded on an HBCU campus.

Speaking of creating the next round of leading founders, what tips do you have for HBCU students and aspiring founders on starting a business?

First, make sure your idea is solving a real problem.

Start with a problem in which you as the founder have some differential insight or some different approach than everyone else. The best businesses that I see are just people solving problems for themselves, and building products for themselves. That’s how Facebook started - it was Mark Zuckerberg building a product for himself. With Evan Spiegel and Snapchat, Spiegel was building a product for himself.

From there, ask yourself, is this an idea that needs venture capital? There are a lot of different types of capital out here with different expectations, different requirements on the founders. Really ask yourself, what is the scale of my ambition and does it really require venture funding?

Next, build your network. That means building relationships with venture capitalists, and building a founding team to complete the picture.

From there, when it’s time to pitch, specifically for venture capital-style businesses, the picture that you want to paint is why you can build a massive company off of your idea. That is so important in early stage funding. A lot of times, founders will tell a very small story, or a very narrow story about solving a very little problem.

The more exciting thing is to show that if you solve this problem, here are all the other things you can do and the scale of the company that you can build.

As an example, Uber started as solving a problem for black car drivers. The idea was to pick up wealthy clients via the Uber app using their black car, but then Uber added Uber X and then more of the various product lines that they have today. In doing so, they reinvented transportation.

When you look at it, there are two stories that you could have told at Uber’s earliest stage. If you’re Uber, you could have told the story that’s like, ‘Hey, I'm building this app for black car drivers,’ which is what Uber was in the beginning. But as Uber, you have to make sure that even early on, you're painting the big story around why this is going to be so impactful, and revolutionize an industry.

What are some of the greatest elements that every founder should have in their pitch?

First off, clearly articulate the problem and the mission of the company.

Next, you need to have a clear approach to this problem that feels differentiated from what everyone else is doing. Typically that comes from the team's lived experience.

The third thing is your “why now.” Ideas need to be met at the right time in order for them to be massive companies. A classic example is Webvan versus Instacart.

Both were delivering groceries - one ended up being basically a zero, and the other one will likely be a $100 billion company.

The difference was timing.

Webvan and Instacart were about 15 years apart when they got started. The digital movement and people’s willingness to buy groceries online was just very different today than it was in the late 1990s when Webvan was started.

Lastly in your pitch, you need to share why your team is THE team to start the business. What unfair advantages do you have? Have you experienced this problem yourself? Why have you assembled the absolute perfect team to do it?

Those are the essential elements for an early stage pitch.

How should founders discuss their competition in their pitch?

First you need to have the conversation about competition. I personally believe if a startup says “we have no competitors,” that’s not a great sign.

What I’ve noticed is that companies get started in waves - like Uber and Lyft.

I think it's a good sign when other really smart folks are focusing on the same problem because it validates that the problem is a big one and an interesting one. The other thing, you need competitors alongside you in order to grow the market. For example, if there’s just Uber, I'm much less willing to try it than if there is Uber AND Lyft because it seems like ‘oh this is a real thing, I should try one of them out.’

As a founder, when you list your competitors, focus on the companies that your users are actually going to use (even if it’s a huge company), and emphasize how you’re different.

Know that all startups will go up against huge companies, like Snapchat in its early days was competing with Facebook, a multi $100 billion dollar company. Facebook, relative to Snapchat in its early days, would always be able to outspend and outhire them. There was no advantage that Snapchat necessarily had over Facebook when it was getting started, except that it took a different approach, stuck to it, and then built the business that way.

Founders, don't be shy about putting those massive companies on your deck as competitors, but have a thoughtful answer to how you can solve this problem better than they can. By the time you get to companies that are in the hundreds of millions of revenue, those companies move slowly and they have a bunch of other concerns that they're thinking about.

You have an opportunity to share that because these companies are so big, they're overlooking a big problem and a lot of customers. You can then ride on those companies' tailwinds, build a big business, and explain to the investor how you can still win. 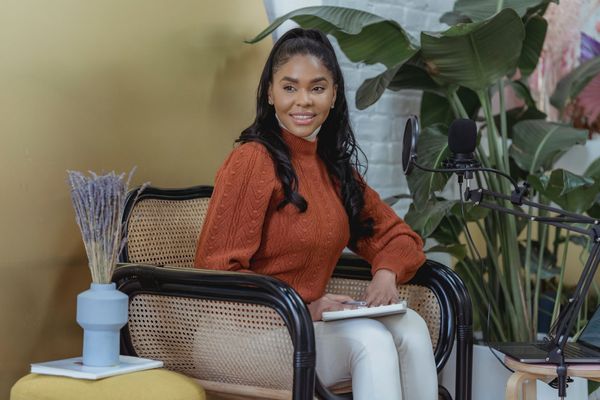 We are here to stayWhen it comes to the corporate workspace, it’s no secret that Black people are making a huge difference in their industries. Whether they work within

When the COVID-19 pandemic hit us, we all presumed our time working from home would be temporary. However, weeks turned into months, and months eventually turned to a year, and