Are you building your media company, but are struggling with getting visitors to your site, and can’t seem to connect with your target audience?

If so, you may be struggling with brand authenticity.

Hold up, what the heck is brand authenticity?

To keep it simple, brand authenticity is when your consumers perceive you to be true to yourself and to them, genuine, and you're basically real AF (no BS).

Having brand authenticity is important because data tell us that ninety percent of people feel that authenticity is critical when deciding which brands they’ll support and mess with.

So what does this really mean and why should you care?

You can’t go out, get a cute logo, and create a dope ass slogan and expect people to automatically love you. It just doesn't work like that.

It doesn’t matter if your content is A1 and you have the best writers working for you either. The truth is, people need more than that when it comes down to the media companies they’ll rock with. People want to truly connect with brands, and want to feel that the brand is authentic and genuine.

Brand authenticity is literally one of the key things that’ll take you to the next level in your media company (or honestly in whatever you’re building).

Black With No Chaser, created by CJ Lawrence is a Black-owned media company that’s as real and authentic as they come. Over the past three years, they’ve done an incredible job being authentically Black AF and for being an outlet where the Black community can trust their platform, be unapologetically themselves, get some good laughs in, and collectively discuss their experiences being Black in America (and beyond).

Recently, we had the chance to talk to CJ and we chatted about all things Black With No Chaser, and how being authentic has helped them be the dope media brand they are today.

In this article, you’ll learn how Black With No Chaser has exemplified brand authenticity since day one, and you'll get some tips on being authentically you when building your brand.

We were created as a Black safe place where we can have our voices unpoliced and unfiltered, both in a digital sense, and a real sense because there are very few spaces right now in the world where we can be unpoliced. Black With No Chaser wasn't created as a reactive type of response to what was taking place in the world, but more so as a proactive call to action by people to come together and create a system in which both we control our own narratives, told our own stories, amplified our own voices, and created opportunities for future generations of Black folk.

Even though we’re still new and growing, what we’re doing resonates with the people and it is authentic to them so we’re really excited about that. With Black With No Chaser, we wanted to create an environment that was safe and where we could be Black with no chaser.

I remember when we launched, initially we had several iterations of blogs prior to what eventually became Black With No Chaser. Black With No Chaser was a phrase or a battle cry statement that I used to continuously say. It was another way to say I’m unapologetically Black, and I'm going to deliver it to you unfiltered. I'm going to say what I have to say, without fear or without reflecting on other people.

At Black With No Chaser, we’ve been able to help our people have this unapologetic space in a humorous, yet thoughtful way. On our platform, we make people laugh and think, and we were also engaging them around coalition building and other opportunities.

Authentic brands connect with their target audience on a personal level

At Black With Chaser, we wanted to create an environment where people could be them. As Black folk, we should be able to be ourselves and not have to code-switch.

Even when I look at my team, we are from HBCUs and we come from environments where we could breathe easily and had similar experiences. You know Wednesday was ‘Fried Chicken Wednesday’ and Friday was ‘Catfish Friday’ at our HBCU. That experience was real and it’s something that we can all relate to.

Just like Solange said, this shit is for us, and the people that rock with us feel us on that.

At Black With No Chaser, we don’t exist for other people’s comfort. We are creating environments for our own comfort, knowledge, our own empowerment, and to mobilize and organize our people.

Brand authenticity can be seen within the team

I went to Tougaloo College, which is an HBCU in Mississippi, and while there I met a core group of friends that’s with me now at Black With No Chaser.

We ran campaigns and projects together, and connected from there. One of those friends was my campaign manager for every campaign I ever ran, even the one where I ultimately became the Student Government Association president. The other friend was a DJ that always DJ’d at my events. Another one of them is my fraternity brother, my prophyte (Roo to the Bruhz). The way we came together in college and started working together later was kind of divine. I feel that God brought the core group of people for Black With No Chaser together early on and that we were on the same page. Literally, we met in college my freshman year in a gospel choir, and we just bonded with one another from there, and these same friends have been with Black With No Chaser since day one, and have the same values.

But honestly, that’s the move. I live by the Issa Rae philosophy of rocking with the people to the left and right of you. I feel like if you build that way, are authentic, and have a proper foundation, you’re going to go up anyway.

Think about it too, that’s how Issa Rae became who she is today.

Be consistent even when times get tough

Even though we’ve had some good days, this shit ain’t easy to be honest with you. Building a media company is hard, and nothing about this process is quick. Sometimes you may get lucky with a win like we did when we got over 2000 followers on Facebook a week after launching, but that’s an abnormality.

You should be prepared for the grind, and understand that there are phases to growth, and the initial phase is organically building your audience. Building your base and finding your voice as a media brand takes time. You have to figure out what works for you and for who you're trying to connect with.

No matter what you create, whether it’s a media company or not, people are going to come to your platform if they feel like they will benefit from it and can connect with you. The first thing you gotta do is create something that’s appealing, and that people will want. You have to create that minimal viable product in the beginning and that’ll help you see if you’re actually building what people will rock with.

First and foremost, the thing that you have to have is authenticity - no matter what you are building. If you're real with your audience, then it will begin to shine through and will resonate with the people. I think the first order of business when you are creating something is to create something real, not something that is calculated.

To me, the slow build and the slow burn is the better way to success because you get people that started rocking with you organically and then they start telling other people about you. I think word of mouth, as we know in our community, is so influential. Even in my time practicing as an attorney, word of mouth was the way that I got most of clients. I think that word of mouth is how you really begin to get buy-in from the people, and as a media company, that’s important. The first thing that I started to do with Black With No Chaser was build a community within the community of Facebook which was where we initially launched. Doing that first helped us to be who we are today.

In the beginning, we didn’t really have a social media strategy or anything like that. But for me social media and connecting with people came easy. I was already doing well on my individual Facebook page, so when we launched Black With No Chaser, I basically took the Facebook statuses that I would normally write for myself and posted it on the Black With No Chaser page to grow this new audience.

Eventually I started to bring more people onto the platform that had different thoughts, and allowing them to express themselves on Black With No Chaser helped us grow too. We honestly didn’t know what we were doing in the beginning, but we were true to ourselves and to our people, did the work anyway, and learned from the ups and downs.

Authentic brands have a certain vibe about them

At Black With No Chaser, we don’t catch the wave, we create them. We’ve never had the desire to go after influencers to bring attention to us because our desire is to be that influencer and to show that we are influential.

You know a lot of people are so fixated on the idea of getting a seat at the table that they will do whatever it takes to fit in other people’s boxes. The problem with that is while they may give you a seat at the table, you’re probably the only one at that table. Meanwhile, we are creating our own tables with Black With No Chaser, and I'm not trying to get a seat at anyone else’s. Because understand this, with me creating this fire ass shit that we’ve made, I know that these folk will be checking for us anyway.

Our goal, our mentality is to build and create something that empowers us as a people. The goal has never given never been about me, but it's always been about the love for my people and how we can advance the people in an authentic way. I think that resonates with our people because they can see when you’re genuine, and when you’re not being a predator trying to exploit them.

Being driven and waking up every day with a full heart to do the work to ensure we rise as a collective is my growth strategy and it works.

My strategy for Black With No Chaser is to be authentically me in front of a lot of people enough times to show them that this shit is real, and that we are doing the work to help our people grow. 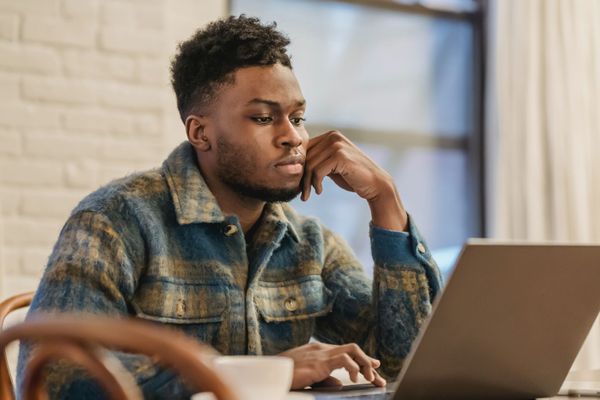 You’ve got a great team, but there’s lots to be done, and some of it isn’t pretty. How do you decide who does what without demotivating or

Over the past 15 years, Y Combinator (YC), a startup accelerator, has funded over 2,000 startups including Airbnb, Squire [https://www.mogulmillennial.com/dave-salvant-squire-technologies/], Stripe, Reddit, Coinbase, Doordash, and