In the age of social media and FOMO (fear of missing out), it’s tempting to stunt a little and want to rush your career journey. But who can blame you? Within 1 quick minute of scrolling on social media, you see all the glitz and glamour, and can easily feel like you’re not doing enough.

However, one thing we fail to realize when we’re comparing ourselves to other people is that there is no such thing as an overnight success. Your favorite boss or mogul that you look up to didn’t become who they were instantaneously. You have to literally work hard and be consistent. In case you didn’t know, hard work is one of the most important ingredients in being successful.

Jordan Hora, award-winning public relations and communications maven, is the perfect example of what happens when you consistently work hard and have faith in yourself. Early in her adult life, Jordan practiced the art of hustling smart, having grit, and possessing an impeccable work ethic in every opportunity that came her way.

Jordan, a Dallas, Texas native, went to Oklahoma State University and obtained a degree in business. Towards the end of her college career, Jordan learned about a fellowship opportunity with the White House. After being approached by an Oklahoma State faculty member suggesting she apply, Jordan submitted her application and was selected to be a White House fellow. While working at the White House, she worked in the Bush administration in the office of Faith-Based and Community Initiatives for 6 months. It was there where Jordan realized her love for communicating messages from powerful platforms to inspire people.

After graduation, Jordan was approached by a long term mentor who had success in corporate America. Her mentor was starting a boutique PR agency startup. She wanted Jordan to work for her agency to help out with some of their recent client projects – at the time they had clients like Just for Me, Soft & Beautiful, Motions, Taco Bueno, and Church’s Chicken. For Jordan, working at a PR startup agency was an opportunity of a lifetime so she took her mentor up on her offer. At her new job, Jordan was an account executive working on African American and multicultural beauty campaigns. She worked at this PR startup for two years until she was recruited by another PR agency. At this new PR agency, Moroch, Jordan was able to help McDonald’s with their social media strategy. At the time, McDonald’s was getting their first start at social media. McDonald’s solicited ten markets to test their Twitter accounts around the country and Jordan’s market was one of the selected markets. Through this opportunity, Jordan helped the McDonald’s corporate team develop their national protocols for social media.

During her time working on the McDonald’s campaign, Jordan kept busy and worked on several side projects of her own. She helped several local entrepreneurs with their branding who wanted exposure, but didn’t have millions of dollars in their marketing budget like a big brand like McDonald’s. During this same time, Jordan also decided to launch her own virtual consulting agency called JH Collaborative. At JH Collaborative, Jordan worked on influential, cause-related campaigns that inspired her, and that she felt impacted the culture.

After leaving McDonald’s, Jordan knew that the next organization that she joined needed to be one that aligned with her personal values and goals. For Jordan, just going out and getting “another job” wasn’t enough. She wanted to find an organization where she could uniquely create powerful message that would inspire people. In her quest, she saw an opportunity with TD Jakes Ministries and started working there as a Senior Public Relations Manager. Within a few years, she was promoted to their Director Of Communications, and is currently responsible for planning and leading national and international strategies, enterprise branding, and serving as the public relations counsel.

Throughout her career journey, Jordan has experienced alot and has learned many valuable lessons that can help anyone, regardless of their career field. During our chat, Jordan dropped may gems on career building and hustling smart. Here are our 3 top takeaways.

If you don’t root for you, who will?

In her career, Jordan received a series of promotions at each company that she worked for. Looking at her experience, one thing that Jordan found in common is that, “ You get promoted for what you’re already doing.”

Jordan believes that there isn’t one set of rules that says certain tasks and responsibilities are only for one person. As Jordan told me, “If you want to be paid for doing more, start doing more. Take initiative, be creative.”

One vital piece of career advice that Jordan shared was, “You have to communicate to the key people making decisions on what great things you are doing. Start early, build relationships, and become an advocate for yourself. Be seen doing the work. In this age of technology, often times good work can get overlooked. You have to be an aggressive champion for yourself.”

Stay ready so you don’t have to get ready

Have you ever been in a situation where an amazing opportunity was staring at you right in the face, BUT you were unprepared? I have.

One of the easiest ways to ensure you’re prepared is being able to effectively pitch yourself. Sometimes while pitching, you may forget key details on your experience and what you have to offer. In order to combat this, Jordan recommends that you keep a “brag book” handy.

This brag book should include all of the amazing things you do from client feedback, praises from your boss or team, or awards you’ve been given. By having your brag book, Jordan told me, “When it comes time for a review, you’ll have all of your successes in hand and ready to share.”

Do not fake it till you make it

With social media, it’s easy to compare yourself to people. As Jordan told me, “Sometimes when you compare yourself to people, you tend to inflate your skills and abilities, and sometimes that inflation ends up on your resume. Do not do that. As quickly as you’re able to lie and inflate your abilities, it’ll be just as easy for your employer or a client to realize you don’t know what you’re talking about, or what you’re doing. Do not fake it till you make it because guess what, you won’t make it.”

People can see through the lies and can quickly tell if someone is not being honest with who they are and their abilities. Instead of faking it till you make it, focus on the things you need to learn and skills you need to master in order to become the person you’re tempted to “fake” to be. 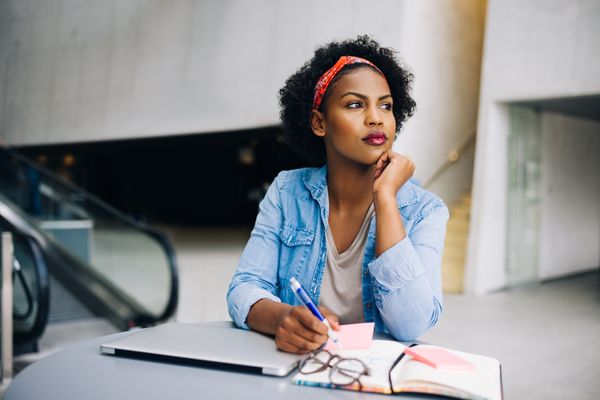 Hindsight really is key.  Below are a few game changers from entrepreneurs, nine-to-fivers and me, your favorite personal recruiter and career coach. Enjoy. I worked both in corporate America and